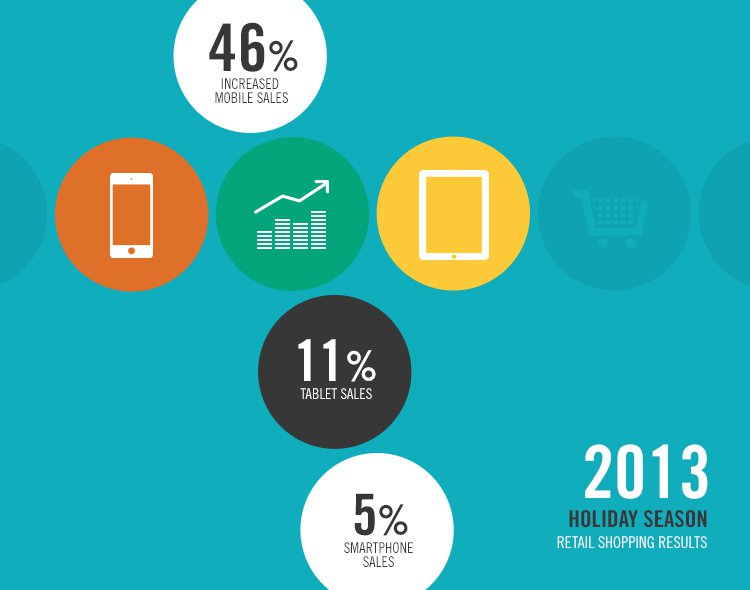 The 2013 holiday season saw large increases in digital and mobile sales transactions. A study by IBM Digital Analytics Benchmark found that online sales during the holiday season were up 10.3% year-over-year.

While smartphones were the choice for browsing the web, tablets drove actual online sales. Smartphones accounted for 21.3% of all online traffic, almost double that of tablets at 12.8%, while tablets captured 11.5% of online sales compared to smartphones at 5%.

The IBM study also found that department stores drove online sales with a 62.8% increase over 2012, with mobile sales increasing over 49% year-over-year.

Many shoppers at the mall are skipping the checkout line and buying online instead. 58% of smartphone users use their phones in stores to check prices, but then buy later from an online retailer, like Amazon.

The convincing numbers for mobile and digital over the holidays only confirm that mobile shopping isn’t the future of digital - it’s the present.

The Top Grocery eCommerce Platforms in the U.S.

Since COVID-19 emerged in early 2020, the global pandemic had a profound effect on our way of life and accelerated the shift to eCommerce – and nowhere is that more evident than in the grocery category. During the pandemic, millions of US consumers loaded up their carts and shop…

In today’s digital business world, not only is a mobile-friendly and optimized website an option, it’s an absolute necessity. This revelation is not new – we’ve known for years that more people are using mobile devices to browse, search, and buy online. In fact, [61% of Google s…

While there’s great progress being made, there continues to be a gap between women-owned businesses and female leadership roles versus their male counterparts. In 2019, for example, annual revenue of male-owned businesses was [almost 2x higher](https://www.globenewswire.com/news…

Video content is king in the world of social media. Just go online right now and scroll through the gamut of short-form videos, stories, challenges, vlogging clips, and full-production ads. It’s clear that video on social is the future of marketing and advertising. Video content…